The UK’s top companies continue to increase the representation of women on their boards. Of the companies listed on the FTSE 100, 46 are classified as STEM and 54 as non-STEM. 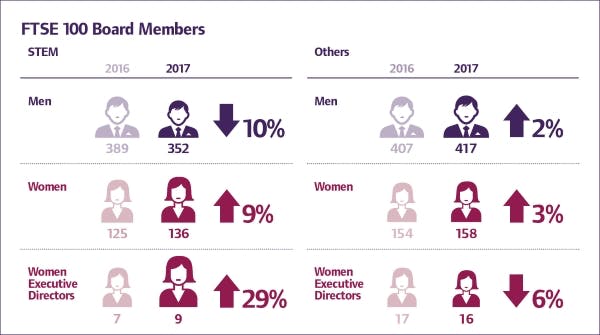 Towards gender balance on boards

Other companies in the FTSE 100 are doing better than those in STEM sectors.Executive board roles

Boards have been slower to increase representation of women in executive positions.

Thanks to suggestions from WISE, the 2017 list of women to watch includes more women with a science, technology and engineering background.

WISE corporate members are using the Ten Steps framework to nurture talented women in their organisations and provide opportunities for them to take up roles on the board.

WISE analysis of data from the Cranfield University School of Management Female FTSE report 2017. The report ranks FTSE companies according to the percentage of Board directorships that are held by women.