From Classroom to Boardroom: The STEM Pipeline

WISE has analysed the gender balance and trends at every stage of the STEM Classroom to Boardroom pipeline. 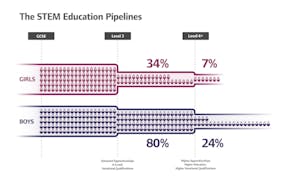 Today the STEM worker shortfall is estimated to be approximately 69,000 thousand per year. Without drastic change, UK key growth industries risk stalling and the UK has the potential to fall even further behind other European countries. A press release at the WISE Conference, on 10 November 2016 highlights one potential solution – to focus on the 50,000 girls turning away from a STEM education every year. Without significant change to increase the potential number of skilled STEM practitioners leaving education, the labour force skills shortage will only deepen.

Only 33% of girls who take maths and science GCSEs progress into any form of Level 3 core STEM qualification, whether this is via the A-level, advanced apprenticeship or vocational qualification routes. This is compared to 80% of boys from the GCSE cohort that progress to a Level 3 STEM qualification. Many professional STEM occupations require qualification at Level 4 or above, which may be through higher education, higher apprenticeships or further vocational qualifications. Only 7% of the girls who take STEM GCSEs will go on to qualify at Level 4 in a Core STEM area, this is drastically lower than the 24% of boys who will leave education with these qualifications. This represent a real risk to the future STEM labour force and will likely exacerbate the current skills crisis.