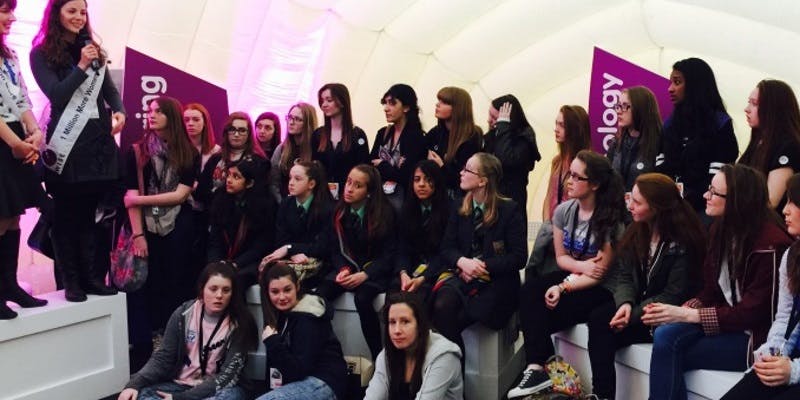 These young women design Space craft and submarines. So, what advice would Britain’s first all women board of young engineers and scientists give their teenage selves?

From an engineer on the Solar Orbiter Mission spacecraft to a naval architect designing submarines, the WISE Young Women’s Board have heaps of advice for their teenage selves – and the thousands of girls that flocked to the BIG BANG Science Fair in Birmingham last weekend.

From “I thought I couldn’t be a country singer and work for NASA” to “When I was at school I didn’t know what engineers did” – they’ve all made their own way into engineering. Now the Board are ambassadors for WISE, promoting female talent in science, technology, engineering and maths, and they’ve got some great advice for their younger selves.

Anna Cheng has a dream job at Intel launching amazing technology to the international media from its first luxury smart bracelet with a sapphire display and semiprecious gems, to Big Data and the Internet of Things. Her advice “I was a shy nerd. I’m not going to say that high school and my teen years were the best times of my life when in truth, they were some of the most mortifying years of my life. But that’s what I would tell my teenage self, that it’s ok. Who you are in your teenage years doesn’t define you, it is the foundation of who you are going to be in your 20s, 30s and beyond. I would tell her that being curious about science and being great at maths will serve her better in life than sitting at the popular table at lunch, which I wished for constantly.”

Lucy Collins, who works for the Ministry of Defence, was the first female civilian to do uniformed sea time in a British submarine. She spent six days as the only woman on board. Now she designs them. But being a naval architect wasn’t her first career choice. She originally wanted to work for NASA and her first piece of advice is “Rise to the challenge and you’ll find yourself achieving things you never even thought possible. I became a naval architect purely because of one sentence; ‘designing a submarine is more challenging and complex than designing the space shuttle’. I was sold. And I’m not saying it was smooth sailing – I made some mistakes but it didn’t matter – what did matter was that I didn’t shy away from the challenge.”

Her second bit of advice is “Have passion for what you do and love it. I’m an engineering ambassador and if I convince even one girl to consider engineering as a career when previously it wouldn’t even have crossed her mind then it will all have been worth it” And the country music? Her granny’s a big fan and she’s just strummed her first song on her local radio station…..so watch this space!

Video: Sian and Hannah being interviewed by Jenny from Siemens at The Curiosity Project

Siân Cleaver works on the Sun Orbiter Mission for Airbus Defence and Space. It’s the spacecraft that will travel closer to the sun than any satellite to date. Her advice: “Learn a language. “I was quite lucky in that I knew from a young age that I wanted to work in the space industry. I completely missed the fact that the space industry in Europe involves most of the countries in the EU, and so knowing another language opens up so many more opportunities.”

Hannah Goodall is a senior engineer with Network Rail and loves her job. She says “Do things that you enjoy doing, not just what you’re good at or what skills you need for a certain job. Figure out the activities and tasks which get you motivated, passionate and engaged. People don’t realise that being an engineer is incredibly creative. I now understand how the skills which are unique to me contribute to how Britain’s rail network operates successfully.”

Emilie Ravel works for Rolls-Royce in Derby on their Trent aero engines. She is originally from France and speaks fluent English. In school she enjoyed maths and science but didn’t know much about engineering. But when she got to university she discovered a whole new world. “That’s when I understood that engineering is involved and vital in so many industries ranging from aerospace, the energy sector to sport industries. What I do now isn’t all boiler suits and axel grease; I work in one of the most high-tech, modern offices in the world and yet I can go down to the aero engine test beds and experience the thrill of seeing the world’s most efficient aero engine, the Trent XWB, being put through its paces. It’s so exciting! So my advice is that technology is all about innovation and teamwork so really explore the opportunities out there and you will find a career you have never even dreamed of”.

Keeley Burke works in the oil and gas industry for Halliburton. Her expertise lies in developing the next generation of drilling tools that will be used to find the oil and gas fields that will provide us with fuel and power for future years.

“When I was younger I loved science and maths but never considered engineering. That was because I didn’t know what it was about or know any engineers. So my advice is to look wider than just the subjects you can study at school, find out where those subjects can be applied and what other career paths are open to you.”

The WISE Young Women's Board at the Big Bang Fair