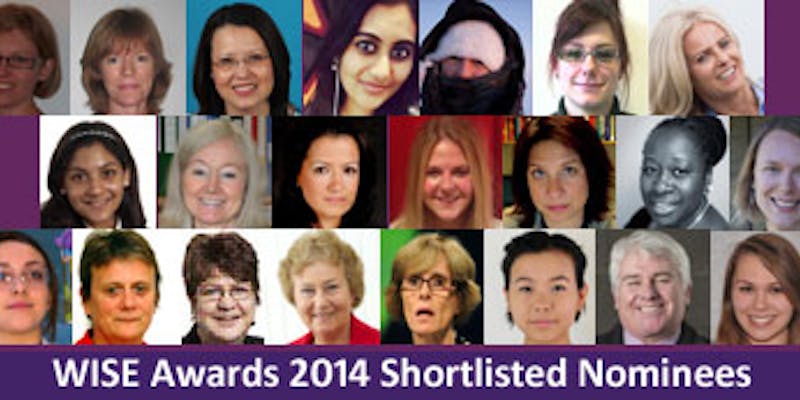 The shortlist for this year’s WISE Awards in association with headline sponsors Bloomberg, published today, highlights 28 individuals and organisations for their outstanding contribution to the representation of women in science, technology, engineering and mathematics (STEM).

The annual WISE Awards celebrate female talent in science, technology and engineering – from classroom to boardroom – and recognise the efforts of advisors, employers and other organisations to encourage and support women in STEM careers. 2014 marks the 30th year of the WISE Campaign and the Awards event is bigger than ever.

Commenting on this year’s shortlist, Trudy Norris-Grey, Chair of the WISE Campaign, said: “It is a privilege to celebrate the achievements of all the heroes on this list. From school leaver Charlotte Kerr, the youngest STEM ambassador in the North of Scotland, to the lifetime contribution to medical research made by Professor Dame Kay Davies of Oxford University, all these individuals represent inspirational role models for those who follow in their footsteps. I am delighted that the shortlist also recognises the vital contribution made by employers and other organisations to supporting women in STEM careers.

“WISE would not be able to present these awards without the generosity of our sponsors.  I am very grateful to them for their continuing support and their commitment to our shared goal of increasing the representation of women in STEM.”

The shortlist contains five categories of award for girls and women working in STEM, from “Girl” to “Lifetime Achievement”.  It also recognises four categories of individuals or organisations that have increased the recruitment, retention and progression of women in STEM organisations or sectors where women are currently under-represented.  Each category is sponsored by companies or institutions that support the objectives of the WISE campaign. The 28 names on the shortlist were selected from a record number of nominations and the full list can be seen below.

The winners will be announced on the evening of Thursday 13 November at the Grange Hotel Tower Bridge, London, where WISE is hosting a black tie gala dinner and awards ceremony with headline sponsors Bloomberg. Her Royal Highness The Princess Royal, patron of WISE, will present the awards, and the ceremony will be hosted by Alice Bhandhukravi, reporter and presenter with BBC London TV News. There is also a daytime programme on the same date at the Southbank Centre on the topic of ‘The STEM workforce we want to build for the next 30 years.’

Awards in this group will inspire girls and women to study and work in science, technology and engineering by showing how they too can make a difference.

WISE Girl Award: Recognises and celebrates a girl/young woman under the age of 18 with a passion for science, technology, engineering or mathematics, whose outstanding achievements have already inspired other girls.
SPONSORED BY INTEL

WISE Apprentice Award: This award celebrates the achievements of a female apprentice in science, engineering, technology or manufacturing, to inspire more women to choose an apprenticeship as a route into a career in STEM.
SPONSORED BY INSTITUTION OF CIVIL ENGINEERS (ICE)

WISE Hero Award: Recognising a woman's contribution to health, well being and safety or improving people's lives through science, engineering or technology, whose story will inspire others to see the opportunities to make a difference through science.
SPONSORED BY BABCOCK

WISE Research Award: For groundbreaking scientific research by a female-led team which has advanced knowledge and will make a difference to people's lives.
SPONSORED BY THE IET & THE WELLCOME TRUST

WISE Lifetime Achievement Award: This award celebrates the achievements of a woman who has had a truly outstanding career in science, technology, engineering or mathematics and has inspired and supported other women to follow in her footsteps.
SPONSORED BY HALLIBURTON

BUILDING AND SUSTAINING THE PIPELINE

Nominations in this group need to demonstrate how their actions have increased the recruitment, retention and progression of women in STEM organisations or sectors where women are currently under-represented.

WISE Advisor Award: For a careers advisor, teacher, lecturer or mentor (male or female) who has increased the number of girls and women who pursue further study and/or find work in science, technology, engineering, mathematics or related sectors and supports them to achieve their potential.
SPONSORED BY ROYAL ACADEMY OF ENGINEERING

WISE Employer Award: Recognising an employer who can demonstrate an increase in the retention and progression of women in scientific, technology, engineering or mathematical roles as a result of actions they have taken to enable women to achieve their potential.
SPONSORED BY ATKINS

WISE Leadership Award: For an organisation which has made a difference to the participation of girls and/or women in STEM to improve diversity and inclusion within their sector. Nominations are invited from STEM organisations, professional bodies, sector skills councils, trade unions, companies or educational institutions which can demonstrate that they have used their influence to drive change.
SPONSORED BY AWE

WISE Champion Award: For an individual champion who has used their position to influence others to take positive action to promote female talent in STEM, within their own organisation or beyond.
SPONSORED BY RESEARCH COUNCILS UK (RCUK)