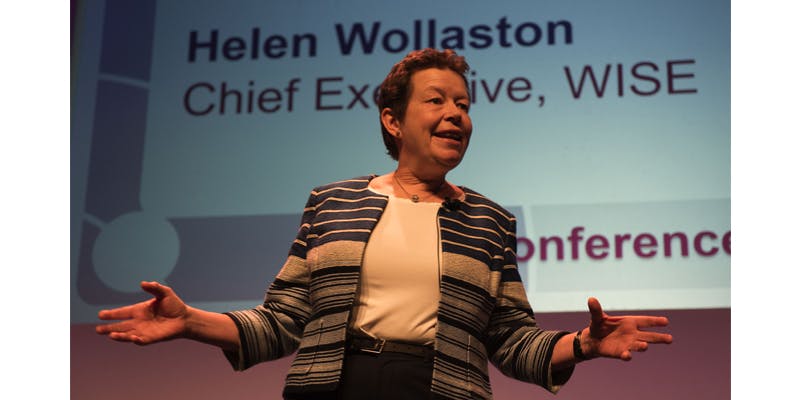 The WISE 2018 Annual Conference hosted individuals and supporting companies from across the UK. The theme of the conference this year, was ‘Innovation’.

Wednesday 9th May 2018 started as a bright, sunny morning in Manchester and saw hundreds of ‘STEMinists’ and WISE supporters descend on The Lowry to celebrate, network, learn and support fellow WISE members.

Attendees were greeted by WISE Chief Executive, Helen Wollaston. Helen outlined the need to improve transparency across our STEM industries whilst encouraging and fostering environments to increase the number of women applying for and spearheading Patent Applications – a recent investigation by WISE showed that only 9% of UK patents currently submitted are by women. Emmeline Pankhurst in 1913 spoke the words ‘Deeds not Words’ in reference to progress of the Suffragette movement. Over 105 years later, these words are still relevant in the promotion of women in male dominated professions. Something needs to change and Helen called for action!

Throughout the day, in addition to the talks in the main amphitheatre, a number of Parallel sessions were hosted. Amongst these sessions was a Taster Session for the ‘People Like Me’ Toolkit during which individuals were able to take part in the PLM activities and learn how this tool kit may benefit them and the businesses in which they work.

Our very own WISE Young Women’s Board hosted a Creative Career Path’s Panel with 6 women (including three from the Board) who have each successfully navigated significant changes in career direction. The panel gave advice to a delegation of undergraduates on a range of topics including how to get into engineering via the apprenticeship route, starting a business, developing skills outside of your day job and how to be brave in the pursuit of the right option.

Additionally, the WISE Young Women’s Board attended the main talks and here are some of our key take-aways:

Morson Group in partnership with Salford University are amongst WISE members currently trying to turn the tide to equalise the balance between men & women in STEM. Ben Fitzgerald outlined the strategy Morson have adopted in order to increase the placement of females in core professional services and IT markets with a proposed pledge to double the number of female contractors placed by 2020. These may sound like big words but Morson are taking big actions to back them up – they currently sponsor the Morson Maker Space at Salford University. This maker space provides an area for staff, students and industrial partners to come together with machines, models, 3D printing and work in a collaborative environment. Dr Maria Stukoff further explained how Salford University have opened up scholarships and support to a wider range of applicants with particular emphasis on attracting females to apply. Maria’s enthused speech proved inspirational, with personal tales of her experience as a female engineer and advice on developing a ‘Call it out at the table’ approach to sexist and derogatory language in the workplace.

Next to follow was Louise Modis, Scientific Director at GSK. Louise reminded the audience that ‘Not all great minds need to think alike’ and demonstrated how bringing together a diverse team from across both the GSK team and also by bringing in external experts, innovation and creativity has flourished. Louise presented the hard facts and figures on increased productivity and measurable success of her team at the Immunology Catalyst Network.

Following lunch, Thales presented on Innovation and Smart Working. A move away from ‘Working from Home’ thinking to ‘Smart Management’ with a focus on achieving targets and developing business practices which allows a customer focused approach was the integral message presented by Ben Hutchinson, Head of Business Change. Kimberley Abbott spoke of her work as the co-founder and CEO of Roka, an award winning social enterprise, whilst also working for Thales – a SMART move to developing the whole person and allowing employees to bring their ‘whole-selves’ to work.

Lydia Fairman and Apurva Sinha of Network Rail followed for the last presentation of the day to showcase how the Power of Words are changing the Rail Industry to attract and retain talent. Providing over 4.6million journeys every day, the need for Network Rail to expand and maintain rail infrastructure across the United Kingdom whilst providing the safest network in Europe is critical. Lydia gave real examples of the outreach programmes which are currently being rolled out by Network Rail to develop a more transparent and attractive business to future engineers across the UK and beyond.

The day was brought to a close with a great debate hosted by Caroline Lefevre to decide if the North South Innovation Divide exists. The North was passionately championed by Juergen Maier, CEO of Siemens UK who noted that the south have led innovation for the past decade and it is now the turn of the North to lead a new decade of Innovation. Siobhan Duffy disagreed and showcased how the South attracted Industrial Diamond Specialists, Element Six. Karen Kirkby reminded that audience that Manchester is ‘Bringing the Proton Home’. The atom was first explained in Manchester in 1803. Fast forward to 2018 and the first high-energy proton beam therapy is due to take place in Manchester to treat cancer without damaging the tissue around the tumour. Dr Bhavagaya, 2017 WISE Winner of the Technology and Engineering in Health Award, spoke of how the South helped to nurture the development of C the Signs, a digital health company that uses artificial intelligence to transform the early diagnosis of cancer. An emotional debate that struck a chord with many audience members, a hot debate followed with audience participation on not only the North South divide, but also touched on some of the earlier speakers themes and closed a fantastic day themed on Innovation and the WISE message.