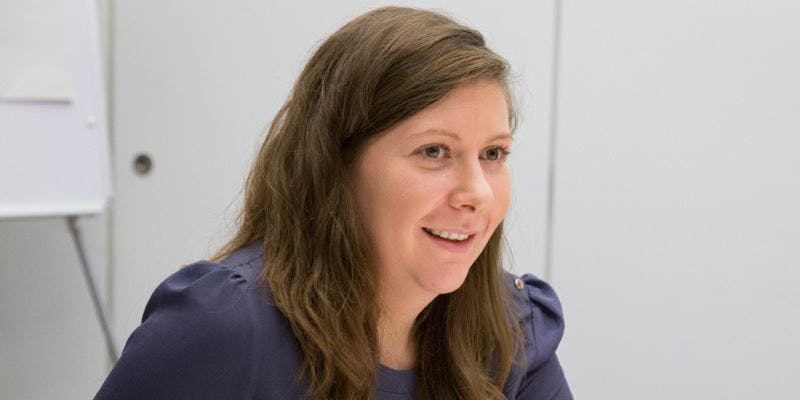 But the thing is, I'm certainly not the first woman in engineering and definitely won't be the last, so why do I still surprise people with my answer?

When I tell them I work in oil and gas, the questions keep coming; “are there other females offshore?" or “how does it feel being a female offshore?”

The first question is very easy - the answer is obviously yes, but the second one is more difficult. Funnily enough, I don’t have anything else to compare it to, but why should being a female be any different? As I see it I am just doing my job.

I graduated in 2012 and started with Atkins, working in oil and gas in the Aberdeen office. I spent the majority of my time in the office, but headed offshore once or twice a year to carry out structural inspections of offshore oil and gas platforms in the North Sea. My first experience offshore happened during a time-critical project, where we were looking to prove that the platform was going to be strong enough to take the load from a new modular unit which was to be installed. I completed the basic offshore survival training and other offshore safety training before flying out the following week. During the helicopter flight, I remember being worried about whether I would fit out my designated escape window if there was an emergency situation – the gentlemen to either side of me were quite large and I had visions of them getting stuck in the window!

While offshore, I am in the minority being a female but this hasn’t put me off. Women work in a variety of roles offshore, from stewards and catering to production chemists and offshore installation managers. It’s really promising to see female role models with successful careers that I can aspire to. There are often more logistical and welfare problems with being a female offshore – bed space is generally limited and cabins tend to be single sex (although this has often worked in my favour and I’ve ended up with a room to myself!). Male toilets are available in locker rooms, but the assets I’ve visited tend more to have female toilets mainly available in the "clean areas" of the platform, which means I need to get changed out of my coveralls every time I need to use them. Progress has been made in the industry over the past 20 years – I know some very senior women who have said that there weren’t even female toilets when they were first offshore!

One big issue working offshore, which I feel I have now overcome, was walking and carrying out my inspections in my coveralls - these were designed for men, and the crotch was down at my knees. This problem was solved by putting them in the laundry boil wash overnight – and they fitted perfectly after that. It just means that I constantly worrying about washing them now!

I think it is an issue of perception and lack of early encouragement that has resulted in women being in the minority offshore, which is why I am more than happy to share my story; I think we need to encourage everyone to share their stories and create inclusive environments to help encourage people to follow in our footsteps and grasp these great engineering opportunities that are available, but not obvious to women in engineering.