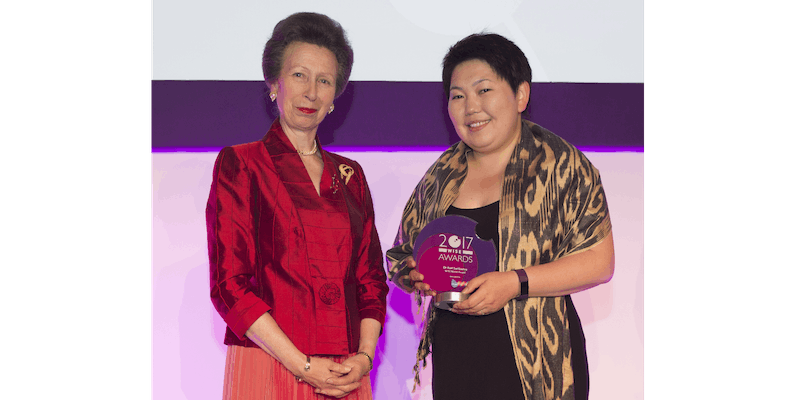 Winner of the 2017 WISE World Award

When Asel took her daughter to be vaccinated two days after her birth, she noticed the doctor take the vaccine from the fridge. She asked – shouldn’t it be warmed and the doctor said no, it will spoil.

She then started to research what happens to vaccines in countries where electricity and infrastructure are difficult. Seven million people die every year from vaccine preventable diseases – three million are children under five. Three diseases have been eliminated (or nearly) – smallpox, rinderpest and polio and all three have vaccines that are stable at room temperature.

Asel has a PhD in Mineral Physics from Cambridge and decided to apply her knowledge of silica-based structures to vaccines – she has now developed a protective coating for vaccines that makes them stable at room temperature.

Asel grew up in Kyrgyzstan and was actively discouraged from science. When she said she wanted to do a PhD in the UK she was laughed at by her peers. But she has succeeded against the odds and is now poised to help save millions of children’s lives.

Asel Sartbaeva, Royal Society Research Fellow and Lecturer, University of Bath. Asel has written more than 30 peer-reviewed scientific papers and book chapters and contributed as an invited, keynote or plenary speaker to more than 40 International conferences, and has organised three International Scientific conferences.

She received a MSc degree at the Kyrgyz-Russian Slavic University in 1999, and MPhil and PhD degrees at the University of Cambridge in 2002 and 2005.

She was awarded a Royal Society University Research Fellowship in 2010, which began in January 2011 on returning from maternity leave. In 2012, Asel moved to the University of Bath to start her own research group and now has an active group with a PostDoc, 4 PhD and 4 Masters students working on projects related to design of novel porous materials and thermal stability of biopharmaceuticals.

She has two daughters, seven-year old Melinda and one-year old Evelyn. Her husband, Dr. Stephen Wells, is a scientist too.

She was one of only two invited keynote speakers from UK at GoogleX’s 2013 Solve for <X> conference. Her project <thermal stability of vaccines> was one of 18 projects discussed and highlighted at the conference. In 2015, Asel was nominated to be one of the 175 Faces of Chemistry by the Royal Society of Chemistry, and a Women of Achievement by UN Beijing Platform for Action by UNIFEM. In 2016, Innovate UK awarded us “Biggest Game Changing Technology” for my project on vaccine stability without refrigeration.