Barbie is back.. and she’s had a controversial makeover 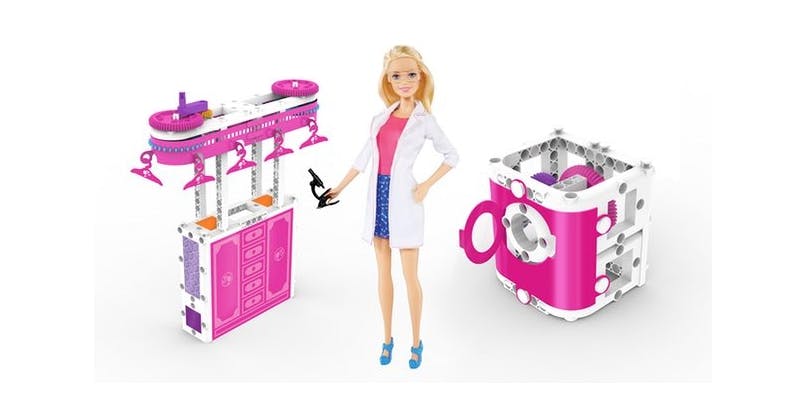 I am a physicist who works in a research lab at a university. Like lots of the other scientists I know, I spend all the free time I have trying to encourage and empower young girls to choose science and maths subjects at school. I am not “anti-doll”. I grew up in a bright pink bedroom, surrounded by Barbies, Sylvanian Families and Beanie Babies. I wore pink clothes and as many hair clips as could physically fit on my head. But I was lucky. My mum is a consultant liaison psychiatrist, who travelled the world giving talks and making people’s lives better. My dad is a neurologist, my teachers had PhDs and I was 20 minutes away from the Science Museum. Like most of the girls who end up studying physics, I grew up with a lot of ‘science capital’. Science was part of my everyday life: we watched documentaries, we spoke about science and we played a lot of trivia games. Unsurprisingly, the world isn’t made of people with lots of science capital. If you attend an all girls school like mine, you’re two-and-a-half times more likely to choose physics A-Level. Most children don’t know about how exciting and diverse science is; the range of careers, the sensational salaries, the opportunities. And for those people, how we promote ‘STEM’ is important. A bright pink Barbie in heels with her hair down and a skirt shorter than her lab coat: that’s not okay.

In the UK, only 9 % of the engineering workforce are women. Having been in a science department since I was 18, I know quite a few engineers: bridge-builders, communication creators and mechanical masters. Some engineers work with industry, some design satellite systems and planetary rovers, and some plan the cities of the future. Very few- in fact, only one, joined white-goods manufacturer: and that engineer was a man. Narmeen Rehman, a mechanical engineer at EDF energy, sees the household appliances as a double edged sword- relatable, but concentrating the misconceptions that housework is the responsibility of women. Siân Cleaver, a systems engineer at Airbus Defence and Space, was super excited when the Lottie Doll hit the shelves last year. 20 years after the Spice Girls, Lottie is a doll with a lot of “girl-power”: she comes with a telescope, fossils and sturdy boots. Siân wants to see Barbie designing a car, which could fit her “Dreamhouse Garage” but is much cooler. She’ll have space for her tools too: according to Life in the Dreamhouse, it comes with “a number of countertops and cabinets that presumably hold gadgets for Ken to tinker with”. Ah, to be as exciting as Ken the tinkerer. Narmeen wants Barbie testing jet engineers and building robots.

Train tracks, dishwashers, fridges: day-to-day, it is sad that most people only hear the word engineering when something breaks. Susie Jutsum, a senior engineer at Tony Gee & Partners, used her brother’s Lego knock-offs to build her dolls houses. She’s particularly upset that engineer Barbie only fixes other people’s appliances, rather than joins the dynamic, boundary-pushing workforce that tirelessly tries to improve the world around them.

Don’t get us wrong- we are all big fans of household appliances, but it doesn’t surprise me that the world’s number one manufacturer of washing machines scores pretty badly for gender diversity. Or that out of the 10 employees of “Foldimate”, the world’s first robotics laundry system, only one is a woman. For completeness, it is worth pointing out the inventor of the automatic garment rack (the real-life version of Barbie’s robotic wardrobe) was a man from Denver.

There have been endless, , generously funded, wildly unsuccessful campaigns to get girls to study science. Without any basis in evidence, time and efforts are channeled into initiatives that become trendy to shout about but have no impact. Longitudinal studies are expensive and teenagers are tricky people to work with. However, the odds are against engineering Barbie changing the numbers of girls choosing STEM subjects. There have been various failed efforts to pinkify science- IBM tried to get girls “Hacking Hairdryers” and the European Commission made a music video “Science, it’s a Girl Thing”. Studies like WISE’s “Not for People Like Me” and King’s College London’s “ASPIRES” project found that, for audiences of certain ages, the language and imagery we use to communicate science is important. What does work? Based on long-term work in schools across the country, the Institute of Physics’ “Opening Doors” project outlines nine features of good practice to counter gender stereotyping in schools. Amongst their advice is treating all instances of sexism as unacceptable and delivering unconscious bias training to all members of staff. I am sure hours of well-intentioned research went into the develop and design of engineering Barbie. I recommend Thames and Kronos, the team behind the doll, start offering some training courses of their own.