Engineer Our Future: A Girls Hackathon at Imperial College London 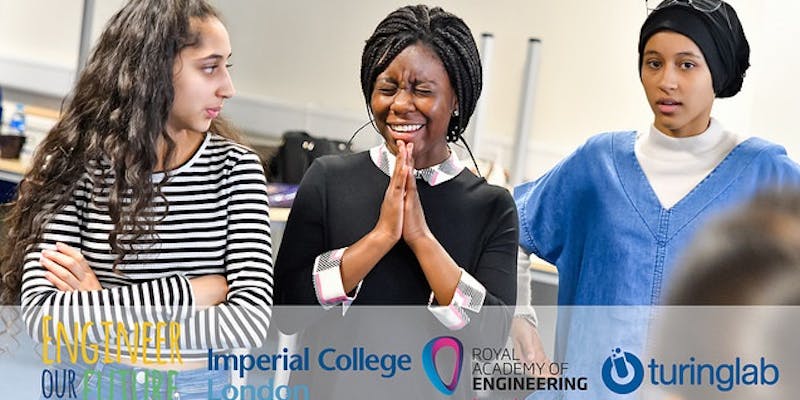 Over 50 students attended from 16 different state schools across London

Engineer Our Future was a Royal Academy of Engineering Ingenious Award winning event held at Imperial College London on 24 & 25 September, 2016. Over 50 students attended from 16 different state schools across London. Over the weekend the girls were presented with global engineering challenges, taught how to program by Imperial College students and graduates, then set-to-task in developing app-based solutions. The girls met many inspirational women working in STEM from across the scientific community, and they immensely enjoyed the opportunities to network with professionals and hear from current university students. The girls were never in front of a screen for too long: from campus tours, to hands-on water filtration workshops, to improvised comedy, this was a hackathon like no other. Anne-Marie Imafidon, head STEMette, hosted a panel discussion, where parents and girls heard from women working in range of engineering disciplines. The girls’ parents and teachers were invited in for a morning of technical sessions and discussion before watching their daughters took to the stage to present their incredible solutions. From a 100-person cake shaped like the Shard to a video game that helped map deforestation, this was a weekend no one will ever forget.

Shoumiya is in year 11 at Mill Hill County High School in Year 11, “I was given the incredible opportunity to attend the Engineer our Future event, which had entailed spending my entire weekend at Imperial College! The event comprised of computer coding and engineering, in which I was naïve- so I used this opportunity wisely to develop my skills.

There was an inspirational talk given by Joysy John, the CIO of Ada College. This talk one of the highlights of the event: she discussed her journey to success and how failure did not limit her from what she wanted to do. Joysy had worked in several different professions before becoming a CIO. We worked in the Department of Computing, where I was utterly astonished by the sheer number of computers. We cracked on with the project we were set, which involved working in small groups using programming to improve a global issue, for example bushfires, which could be implemented in real life. Following our hard work, we were all treated to lunch, which by the way was delicious, and afterwards we were led by the mentors on a campus tour of Imperial College. We were taken through a labyrinth of different buildings, which were located all over South Kensington- we were all taking lots pictures of the beautiful sites. As we stopped to listen to the mentors about the different buildings, one of which was the Queen’s Tower, which stands a staggering 87 metres tall, I marvelled at the fact that I was in one of the best universities, and was surrounded by the presence of some of the brightest minds in the country.

The next day was a complete blur to me- time had flown from arriving at the Huxley Building to leaving and saying our goodbyes to the staff and our new friends. During this time, we presented our solutions that we had created on a global issue after being led into a lecture theatre hall where nine panellists were up on the centre stage. The panellists all had impressed me and I listened intently at each person’s story. I was especially amazed by Mohima Ahmed’s story as she had created Transit, which is a Bengali- English translation app, with her group in sixth form; Mohima was inspirational to everyone. I am extremely grateful to have had this opportunity, and cannot overstate how beneficial it was in improving my skills in coding and developing my interest for it.”

Nicole Ho is in year 11 at Hendon School: "It was so fun to meet other young girls who shared the same drive for science. Over the course of the weekend, we learned how to code and design some fantastic algorithms on Scratch which we presented to our peers and the panellists. It was fascinating to discover the role of engineering and computer science in solving major global challenges around the world, such as forest fires.

We also had the opportunity to talk to women in STEM who gave us some very valuable careers advice based on their own personal experiences. Most importantly, I learned that their decisions to work in engineering and computer science did not arise from a sudden epiphany, but rather from a mixture of failures and non-successes that have led them to be who they are now. I thought this was particularly inspirational because it changed my definition of failure; the real failure is only when you give up.

I am extremely grateful to the Engineer our Future event for changing my perception of science, engineering, and technology. It was incredibly exciting to gain an insight into the careers in engineering, as well as the coding behind the life-changing technology that will surely shape our lives and the future of our planet. "