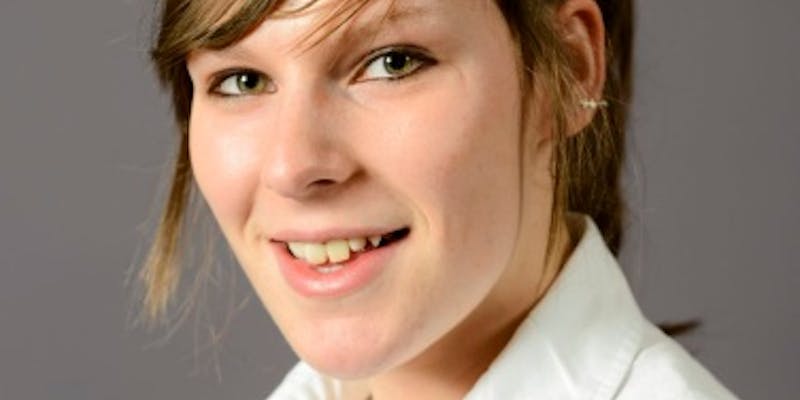 Sophie Bingham lives with her parents in Welling in Kent.

She studied at Blackfen School for Girls in Bexley, sitting and passing 10 GCSEs in 2009. After a spell working at Bluewater Shopping Centre, she realised that neither retail work nor office work appealed to her, and decided against sitting her A-levels.

After speaking to her father, who had worked in the construction sector for a number of years, Sophie decided to apply for an apprenticeship. She explains: “I’d always enjoyed maths and science at school, and remembered how much I’d been interested in the physics lessons where we worked with electricity, so an electrical apprenticeship seemed perfect.”

She was the only girl in her class at Barking & Dagenham College, but made friends quickly. “Everyone was really nice and made me feel very welcome,” she says.

Life on site was tough at first, but she quickly got into her stride. “I think they were all a bit surprised to see a girl turn up, and I was really nervous before I started, but once I’d been going to work for a while and got to know the people and recognise the faces I was fine,” she says.

Sophie has completed her apprenticeship and is hoping to specialise in testing and hopes one day to run her own business. “I like the idea of being my own boss and having the freedom to go anywhere and focus on whatever I want,” she says.

What does her dad make of her decision to take up a career in the trades? “He thinks it’s great,” Sophie says. “He tells me that once I’m qualified I should get loads of work from women who might not necessarily want a man going into their homes – fingers crossed he’s right!”

So would Sophie recommend apprenticeships to a young girl who’s thinking about her career choices? “Absolutely, I’d tell them to go for it. There’s nothing a man can do that you can’t, and once you’re qualified you can do anything and go anywhere in the world!”