Mandy Hickson: Dream it, Believe it, Do it! 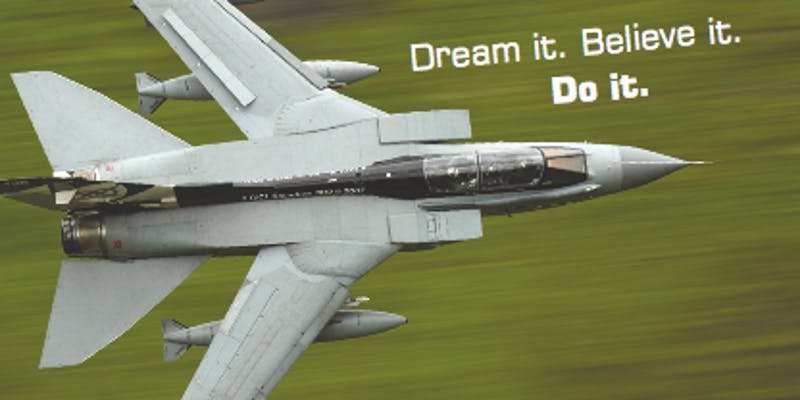 Having served as a fast jet pilot in the Royal Air Force for 17 years I decided it was time to leave for pastures new, but I wasn't quite ready to let go completely, so I joined the Air Experienced Flight at MOD Boscombe Down as a Volunteer Reservist. I now fly the Tutor aircraft and take cadets, aged between 13 and 18, on a flying experience that they will hopefully never forget!

It was on a full flying day that I had the pleasure of flying with a young girl called Emily. We fly four cadets in the morning and four in the afternoon and as you can imagine by the eighth trip of the day you're feeling slightly less inspiring and motivated than you were on the first. This is when I saw Emily for the first time. She was walking out to the aircraft with her shoulders stooped and a slightly surly look on her face. I introduced myself and told her what I had planned for the next exciting 30 minutes flying experience. I was met with a series of grunts that I could only translate as teenage speak for "how wonderful - that sounds like great fun"! It transpired that this was Emily's first flight in any aircraft and when I asked her if she was excited I was simply met by another series of grunts!

We took to the skies. It was a beautiful day with a pure blue sky interspersed with a few white fluffy clouds, the sort of day that is a pilots dream. I started off by demonstrating the basic controls, left, right, up and down..."you have control Emily" I said. "Hmph hmph hmph, ma'am!" I heard in response. Emily seemed strangely relaxed though and flew the aircraft really well. I decided to challenge her a little more. I demonstrated how to turn the aircraft- first simple 30 degree angle of bank turns. These provided no problem to her so I threw down the gauntlet with 60 degree turns. Now these are more challenging to any pilot because if you don't raise the nose and add power you start a rather ominous spiral descent. Unperturbed, Emily manoeuvred the aircraft as if she had been behind the controls all of her life. 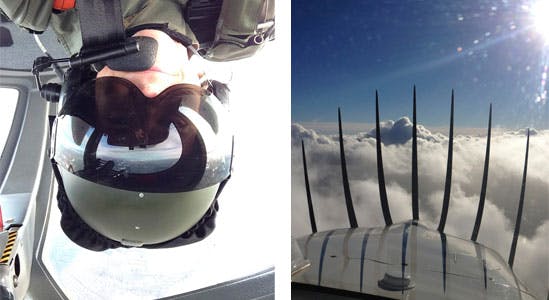 With the cotton wool clouds calling we decided to have a little fun, diving through gaps and gullies in the clouds as if we were taking on a undiscovered landscape, designed by the Gods. Great fun that even the most surly of teenagers could not help but enjoy.... But still not even a smile from my silent co-pilot!

The finale came in the form of aerobatics- ballet in the skies. Once again I demonstrated how to perform a series of tumbles and turns, starting with a wonderful 'loop the loop'. Now if a loop is flown perfectly as you pull out the bottom of the manoeuvre you will fly through the same piece of air that you disturbed on the way in, and the whole aircraft can shake quite violently. I always take the time to explain this as it can come a a real shock to cadets when they experience this for the first time. I flew my loop very smoothly, but alas, at the bottom a smooth pull out-no shaking. I handed the controls to Emily, following through on my own controls in case the manoeuvre did not go according to plan, but there was no need as it was flown perfectly. As she pulled out of the bottom, the whole aircraft started shaking as we flew through the previously disturbed air and Emily turned to look at me with a huge smile on her face. I translated this as "I am better that you!"

I upped the pace, challenging her with more and more complex aerobatics, and they were all flown in the same confident manner.
After returning to the base, I turned to Emily and said "I know you have spent the last 30 minutes grunting at me, I'm not even sure that you've enjoyed it, but can I just say that in 20 years of flying I have never flown with anyone who has demonstrated as much natural ability as you have just done". "I bet you say that to everyone" she retorted gruffly. "I've not actually, I've never said it to anyone- is this something that you may want to do in the future- to pursue a career as a pilot." It was at that moment that Emily looked straight at me, making eye contact for the first time. Her entire body language changed, her defences fell away and she said " yes, it is actually. This is something I've always wanted to do, but I never thought I'd be good enough. I've dreamed about being a pilot all my life and I thought what happens if I came along today and I was rubbish at it? I thought it was better not to try, then if I failed I would know it was because I hadn't tried".

I've thought about this so often since and it always makes me think. How often do you steer away from taking on a new challenge or experience because you are worried you might fail? I'm sure we are all guilty of this at some point in our lives, but until you try you never know what you are good at. Once you have a goal, to visualise, it's always easier to work towards it, to focus on it. So whatever your ambition is.....Dream it, Believe it, Do it!