Ila Glennie: How WISE got me into engineering, and why I stayed in Engineering! 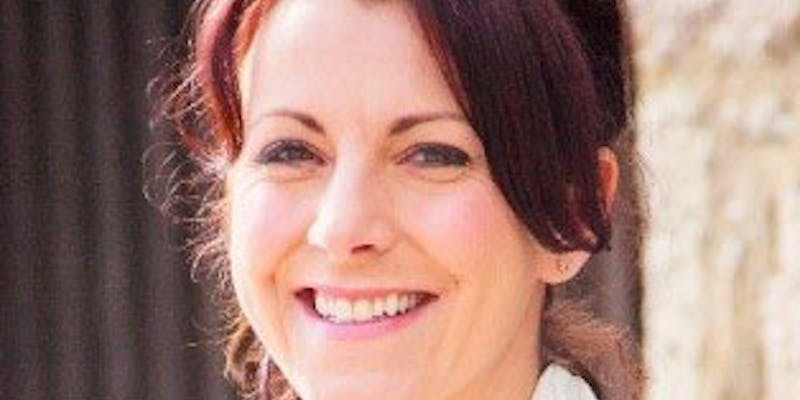 Ila Glennie: How WISE got me into engineering, and why I stayed in Engineering!

I had a number of influences that led me to a career in engineering. Both at school and at home, I was always encouraged to do what I was interested in, and there was no expectation that girls would not take science and technical subjects. For example, in secondary school, we had to make a choice between taking Home Economics or Technical Studies in the second year, and there were several girls who chose technical and boys who took home economics. In my case, my mum had already taught me to cook and sew and I was already making my own clothes (with hindsight, this was not without some embarrassing results!). I did not encounter any resistance at all to doing woodwork and metal work instead of sewing and cooking.

I definitely had a preference and better performance in maths and science subjects, so carried those through, but I loved learning languages and was keen to study French and Latin.

Huge influences during my childhood were my grandfather and his magical garage workshop, and my dad who was always making or mending something. I spent so many hours with them; working on cars and fences, looking after the garden and the animals, and doing renovation work in the house. I am sure this influenced my desire to know how things worked and the science behind the things around me. 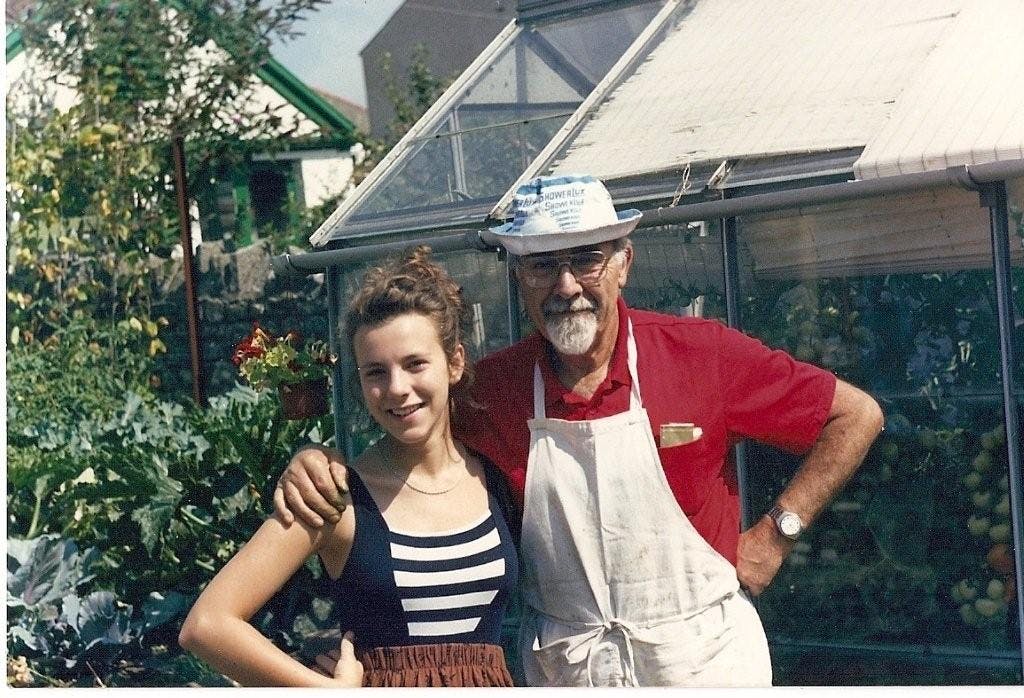 Me and my grandfather Morgan, working in the garden.

A schoolgirl in the 80s

For me, a future engineer, growing up and spending 1980s at school was a really positive environment and had some great benefits:

In 1991 I was invited to attend a WISE week at Newcastle University. If I am honest, the prospect of a trip away from rural North East Scotland was the main attraction for me. However, I am convinced the teacher that put me forward for the trip knew exactly what they were doing. The experience gave me the desire to study further and direction that I had been lacking at that stage.

During the introduction session at the University, we were introduced to the different types of engineering and learned what studying engineering involved. It was a great experience and I got a real appreciation of what life at University would be like.  I knew from that point that I would enjoy studying mechanical engineering and that was what I was absolutely going to do.

So, thanks entirely to my WISE experience, I studied Engineering with Business Management and European Studies at the University of Strathclyde which was fantastic as it included a year of study overseas and would allow me to continue to study a foreign language. I graduated with a first class honours degree in 1996.

Upon graduation I took a job with a major international oil and gas operating company. Very soon after joining I was sent offshore to work as an assistant mechanical engineer. Here I am in my first role offshore. 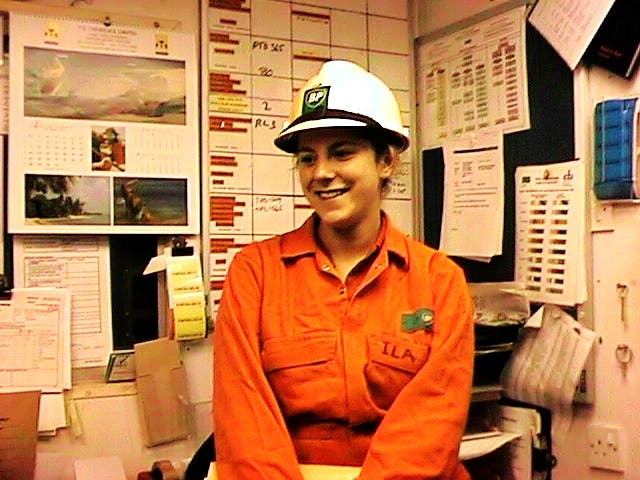 I have worked for the same company for 17 years as a mechanical engineer, focused mainly on subsea engineering and the seabed equipment used to produce and transport oil and gas.

My career so far has brought many positives that have ensured I have stayed in engineering:

The benefits of being the only woman

Often, although not always, I was the only woman working in a team or on a facility, and I think that being a female in a largely male work environment has been very beneficial for me. Although I never actually experienced it, I was afraid of being branded a ‘useless girl’, or ‘the token woman’. I felt I had to prove myself, especially in the early years of my career.  This meant I worked extra hard to show I could do the job and do it well. As a result, I think I came across as hard working, competent and always willing to take on new challenges and scope. Without that fear, I may not have worked so hard, or had so many opportunities! 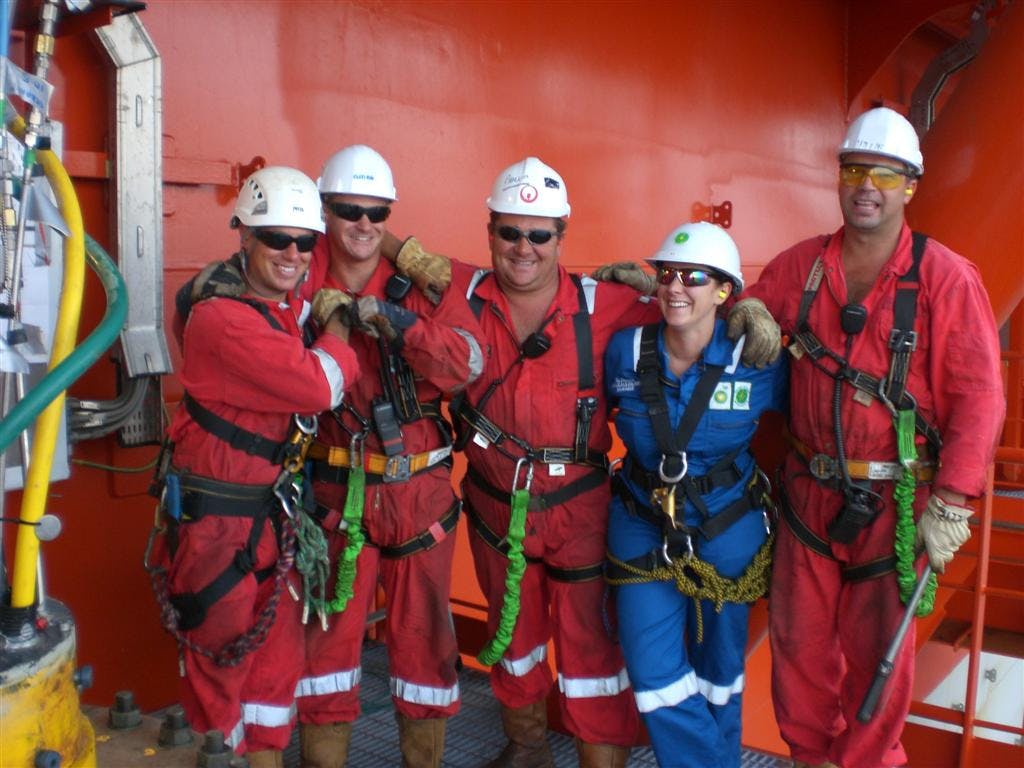 This is me on the side of a ship in Angola, working with a team of South African technicians.

All through my career I have been very lucky that there have been some very good male and female role models in the offshore industry to look up to. I was supported by mentors during the company’s graduate development scheme, and on the route to becoming a chartered mechanical engineer. As I have progressed, I believe it is my job to be a good role model to other engineers and I see coaching and mentoring others as a very important part of my responsibility. I have recently been elected as a Fellow of the Institute of Mechanical Engineers which I think also brings further responsibility to be a positive role model.

In September I took a sabbatical from my company to allow me to take up a post as a senior teaching fellow at the University of Aberdeen. I am lecturing and creating a new course on the Subsea Engineering MSc programme. I am developing new skills and experience, and I hope to be able to pass on some of the knowledge I have gained, as well as to encourage more women into engineering.  There are some great female engineers in the oil and gas industry, but I feel there could and should be more. The opportunities are brilliant and the work is so varied and interesting.

One issue that concerns me is experienced women leaving the engineering profession. I think it is greatly important to new graduates to have both male and female role models in senior positions. I know a lot of work is being done in this area, and some of you may have some thoughts on this?