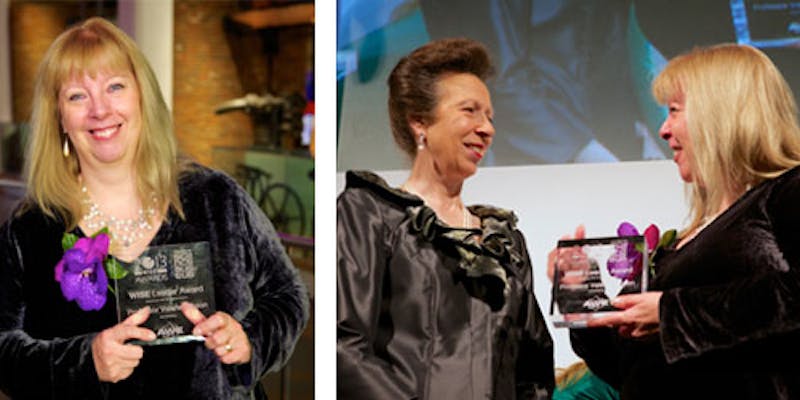 Professor Valerie Gibson, Professor of High Energy Physics at the University of Cambridge, has been recognised for championing female talent in science.

The professor was presented with the Women in Science and Engineering (WISE) Leader award at a glittering award ceremony at the Science Museum, London, last night (Nov 14) by HRH The Princess Royal.

The WISE Leader Award, sponsored by AWE, was won by Valerie for her major leadership role in championing women in science, particularly those pursuing physics as students, researchers and academics. In recent years she has been the driving force behind the Cavendish Laboratory’s success in achieving external recognition of the Department’s work in this area. Val’s hard work, passion and commitment have been key factors in this success.

Valerie is renowned for her co-discovery of direct CP symmetry violation – an important finding which sheds light on the very existence of matter in our universe. This makes her one of the UK’s leading female scientists, and a superb science communicator with numerous media appearances.

After receiving her award from HRH The Princess Royal, Valerie said; “This means I have something to show the next generation: that they can and will be recognised if they are good at science and dedicated.”