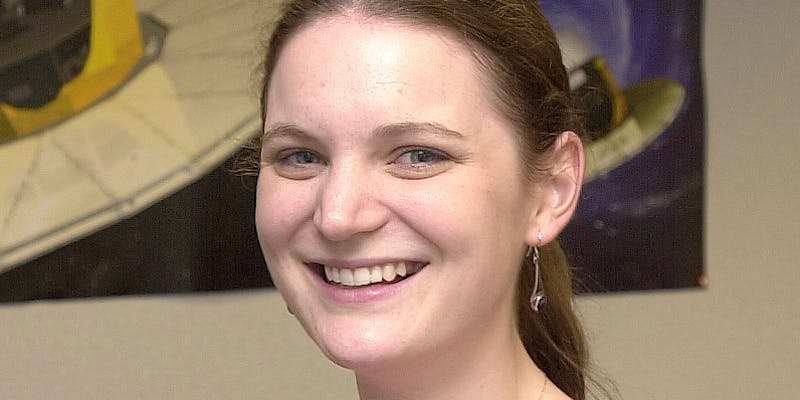 I had always been fascinated by all things Space, but it wasn’t until I was studying for my GCSEs that I decided that I would like to pursue physics further as a subject and more specifically, Space.

One day, after the lesson I got talking to my physics teacher (who also happened to be a woman) about what you could do with physics and before I left she gave me a flyer saying “Rocket Scientists Wanted”. It was actually an ad from the University of Surrey (although that wasn’t why I ended up going there!) and was specifically trying to entice physics graduates into the financial sector, but the overall message about physics being fun, exciting and “rocket science” stuck with me, as did the inspirational words of my teacher who told me that there was nothing you couldn’t do with physics. A few years later, I was looking for degree courses in physics that had a strong space science element. I had also decided that I wanted a course that would offer some insights into the design and manufacture of spacecraft as well. Sifting through the UCAS brochure I found the right blend in the ‘Physics with Satellite Technology’ degree offered at the University of Surrey. And so began my journey to where I am today; an Attitude and Orbit Control Systems (AOCS) Engineer at Astrium Ltd.

The University of Surrey offered another big attraction: an industrial placement year as part of the degree course. After completing two years study I set off for Darmstadt in Germany where I worked for a year at VEGA GmbH, I was assigned to work within the RADARSAT-2 satellite simulation team. This was a real turning point for me as I was able to experience first hand both the world of work and gain an insight into the Space industry within Europe. It was here that I first heard of Astrium.

After returning to the UK for my final year of study I applied to and was accepted onto the Astrium Graduate Development Programme – a two year programme during which spent time in many different areas of the company gaining a wide experience of the business. I worked on the engineering side of the business and I also spent time within the commercial and public relations side of the company. I took the opportunity to spend some time overseas at the Astrium site in Toulouse. I also had the privilege of taking part in Astrium’s multi-cultural “Sail for Competence” - a week long trip where graduates and apprentices from across Astrium’s European sites work as a team to sail a tall ship.

I have to say, when I decided to study physics as a fifteen year old, I’d never imagined I might have such amazing opportunities!

My current role as an AOCS engineer is both rewarding and challenging. The AOCS is one of the most complex spacecraft sub-systems. This complexity comes from the way in which the AOCS must interface with each of the other spacecraft sub-systems. Its role is to control the attitude of the spacecraft throughout the mission lifetime, performing orbital and attitude manoeuvres to ensure that the spacecraft is able to fulfil its mission. The AOCS is responsible for keeping the solar arrays pointed toward the sun, keeping communications antennas pointed toward the earth and telescopes toward deep space. In effect, the AOCS is to the spacecraft, what a driver is to a car.

If I had to choose just one thing I love about my job; being able to say that something I have worked on is actually out there in Space! To me, that is pretty cool!