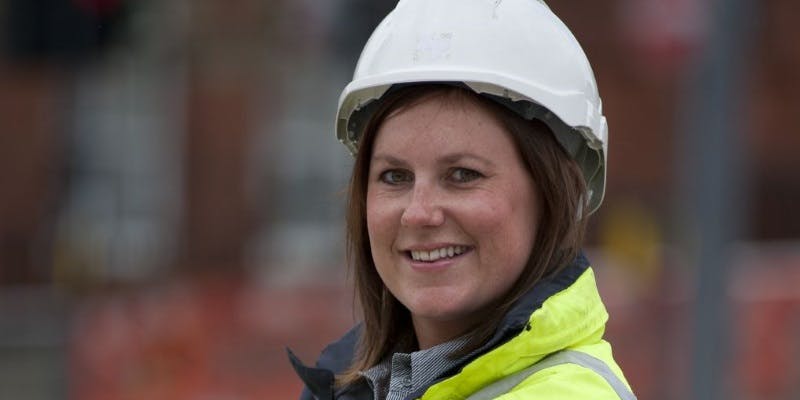 Ellie Reed was on our TVs this year as a contestant in the BBC series The Apprentice. She is an entrepreneur. She has two successful companies in the construction sector. You can meet her in person in Bradford on 13 September at the British Science Festival.

At school I did sociology, psychology and RE A levels, and I went to Sheffield Hallam University where I got a BSc in Psychology. I had a good time at university but also I pushed myself to get a 2:1, because I knew it made a difference to the opportunities on offer.

I applied to be a graduate sales rep with Cadburys – there were thousands of applicants and it was very like going for The Apprentice: group interviews, role play and so on. I was one of just 20 who got picked but selling out of the back of a van dressed in a purple fleece just wasn’t for me! So I decided to go into recruitment, which I knew was an area which would benefit from my sales skills.

The company specialised in placing trades and labour in construction (Henry Court) and so very soon I was out on building sites selling. It certainly was a shock to the system. Just walking on a site when you are the only woman, everyone looks at you and they don’t all take you seriously. However sometimes its advantageous, some blokes prefer dealing with women to men. Some of our competitors wear short skirts and so on to get the business, but me and Alison (she’s my long-term business partner) always wear suits and PPE. We are friendly not flirty!

I then went to work for BBT, placing project managers and surveyors within consultancies. I went from trainee to senior consultant fast, but all the other women there were working on social care and nursing, it was just me and 10 lads on the technical side. I found permanent recruitment boring, not as fast-paced so I went back to the cut and thrust of trades and labour and returned to Henry Court as a regional manager. After a year I asked for a pay rise and was told to get lost, so that’s when Alison and I set up A&E Construction in 2004.

We started in a tiny office, a dump, but we had lots clients and by 2006 we were turning over nearly 2 million a year, with 60 – 100 men a week out on site (just a handful of women in decorating and plastering) so splashed out on new offices and more staff. However in 2008 the recession hit and we had to downsize our office staff and many of our clients went bust. Two things saved us – we had insurance, and we had just set up a second company. A&E Facilities is a company specialising in  final builders’ cleans on a site. Setting it up entailed a lot of hard work as you have to have risk assessments, certification, and be very good at costing. As soon as we set up we won a big contract on a 15000 sq metre school and so had to learn everything very quickly (it was a bit like a task on The Apprentice). It went well and now we have a large client base in the construction industry and a very good reputation.

I’ve also set up another companies Ellie Reed Consultancy, which involves me to go into schools and give inspirational talks. It’s great to give the girls a different role model. Over the years I have also been involved in other business such as running a training centre for recently redundant professionals, and selling LED lighting. During a recession it’s a question of doing what you can to survive.

I went on the Apprentice because my husband at the time was off playing cricket every Saturday and I was bored. It was like with Cadbury’s – I just kept getting through to the next round. I loved being on the programme but unfortunately it’s very edited. I guess I didn’t want it as much as some of the others as I already had my own business so was out in week 5. Now the advice I give is diversify. Having lots of fingers in lots of pies as a good way to survive.