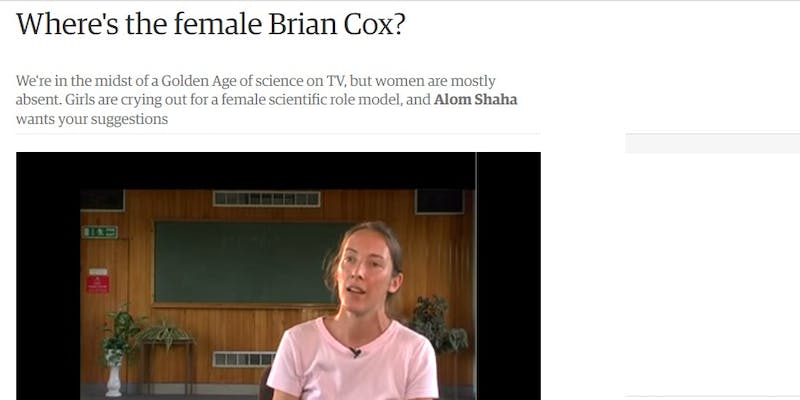 In November 2010, leading science communicator Alom Shaha asked in a Guardian blog, 'where is the female Brian Cox?'.

Alom pointed out that we are in the midst of a Golden Age of science on TV, but women are mostly absent: 'Girls are crying out for a female scientific role model'. Alom named a few women, and asked for suggestions. The responses are set out below.

Read the Guardian article: 'where is the female Brian Cox?'

Dr Aoife McLysaght - Evolutionary geneticist at the Molecular Evolution Lab Smurfit Institute of Genetics at the University of Dublin.

Liz Bonnin - Bang Goes the Theory presenter,who has a degree in biochemistry and MA in wild animal biology.

Joy Singarayer - Climate modeller and co-presenter on Man on Earth with Tony Robinson.

Jocelyn Bell Burnell – British astrophysicist and former president of the Institute of Physics until 2010.

Meghan Gray - STFC Advanced Research fellow and Lecturer in the astronomy group at the University of Nottingham. Star of the Sixty Symbols YouTube channel.

Dr Lucy Rogers - Chartered Engineer, Fellow of the Royal Astronomical Society and British Interplanetary Society and member of the Association of British Science Writers. Author of the book "It's ONLY Rocket Science".

Dr Becky Parker - Head of Physics at the Simon Langton Grammar School for Boys in Canterbury. She is also Director of the Langton Star Centre and contributes to ‘Why is Science Important?’.

Melanie Windridge - Plasma physicist with a PhD in fusion energy who regularly appears on television, radio and podcasts.

Sima Adhya – Space mission scientist with a Master's in space science and a PhD in astrodynamics, currently director of space at Sciemus.

Farrah Nazir - Science explainer at the Centre for Life and winner of the British Interactive Group's best demonstration in 2010.

Dr Samantha Tang - The public awareness scientist at the University of Nottingham School of Chemistry. Samantha appears in The Periodic Table of Videos.

Professor Dame Nancy Rothwell - President of the Society of Biology, Vice-Chancellor of the University of Manchester, neuroscientist and science communicator.

Kerri Smith (@minikerri) Voice and editor of the Nature podcast.

Marieke Navin (@lisamarieke) Science Communication Officer at the Museum of Science and Industry in Manchester. Her PhD was on particle physics.

Dr. Kiki Sanford is a neuroscientist, and has been communicating science through audio and video formats for the past decade. She worked for the Science Channel and was selected to host a Discovery Channel International program called Brains vs. Brawn in 2012.

Dr Laura Waters Pharmaceutical Science course leader at the University of Huddersfield, Laura teaches both pharmaceutics and formulation development. Very involved in Royal Society of Chemistry and is the 2004 winner of the Thermal Methods Group Research award.

Dr Heather Williams (@alrightPET) Senior Medical Physicist at Central Manchester University Hospitals. Specialist in Nuclear Medicine imaging, holds an honorary lectureship at the University of Manchester and is a Leading Light of the STEM ambassador programme. Heather is on the IoP's Women in Physics committee.

Sarah Main is a molecular biologist who appeared on BBC2 series 'E numbers' with Stefan Gates and has written 'biologist with a baby' articles for Baby London magazine.

Sara Santos Founder of Maths Busking with Matt Parker (maths and street performance). At the Royal Institution of Great Britain promoted the 'flash bags of maths' and on BBC One Show with Carol Vorderman.