For the third year, the WISE conference has gone from strength to strength, attracting a diverse audience of those wanting to move the dial on gender balance in STEM, from classroom to boardroom. 40% of the 375 people who joined us on the day were in managerial roles and about a third were men, from a range of businesses, educational institutions, professional bodies and not for profit organisations.

“Can’t keep up with all the great ideas being thrown around – super!”

"The calibre of speakers, the generous debate, the rigorous evidence and the backing from government provided an arena that should set in motion the dynamic change required within business. The only obstacle now is mind-set – the rest of the debate has already been won!"
Emer Murnaghan, Head of Business Improvement, GRAHAM Construction

"It was a privilege to be part of the conference last week and I have to congratulate you on putting together such an impressive programme. It was great to see such a large collection of passionate, strong women – intent on driving change!"
Sharon James, Senior Vice President, Global Head of R&D, RB

"We found the WISE Conference thoroughly enjoyable and productive. We had several excellent conversations with fellow members which inspired us with ideas about how we can get the WISE message out there in our local community and the wider industry. We look forward to joining the event again next year and continuing to support the aims of the WISE Campaign.”
Nick Woodrow, Director, CEMAR

"Thank you so much for inviting us to the WISE conference. It was even better than last year, and we found it incredibly energising and positive. We especially loved the 'Not for People like me' session."
Marina Gask, Consultant Editor at Hearst Magazines UK 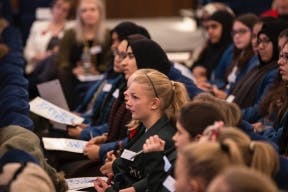 The day started with a People Like Me session sponsored by EDF Energy for pupils from 5 London state schools. Inspired by role models including a Wall Street coder, space craft engineer, an engineer from a nuclear power station, an electronics engineer, physicist and educator, the girls told us at the end of the session that engineers are “glamorous, intelligent, diverse, inspirational”

Linking students and academics to industry 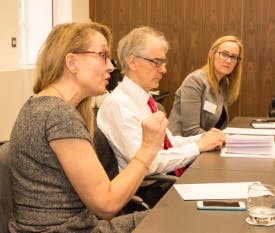 A focus group led by Winton Capital explored relationships between academia and industry. The group discussed how to encourage more women studying STEM at university to choose to work in STEM industries on graduation. Large employers want to engage earlier with students rather than waiting until their final year, not only securing them for a STEM role but helping to address the potential gap in transferrable skills necessary for the workplace. The perennial issue about paucity of careers guidance came up, particularly for those who study a STEM subject at a higher level. Finally, the group felt that additional work is needed to support academic staff to move to roles in industry, without feeling this is challenging preconceptions that may leave individuals feeling like they have failed at an academic career.

Sharon James, Head of Global R&D RB argued for engagement at a younger age. With 20 million products sold daily and 85% of their purchases being made by women, RB has a business imperative to employ more women in technical roles.

WISE People Like Me opens their eyes to the options out there, but this message needs constant support from family, friends and in the classroom:


During the session our delegates undertook live polling via the WISE app. The results of the polling were as follows: 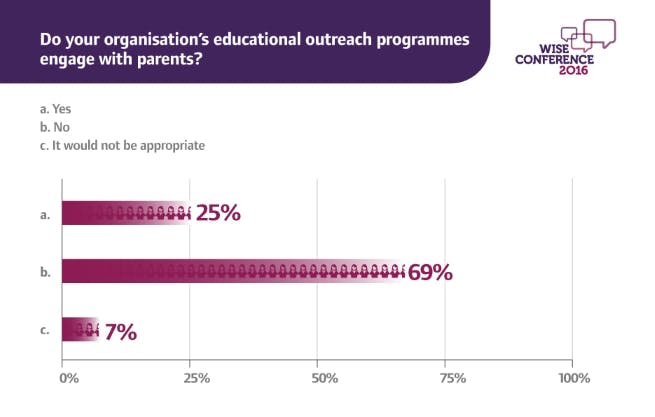 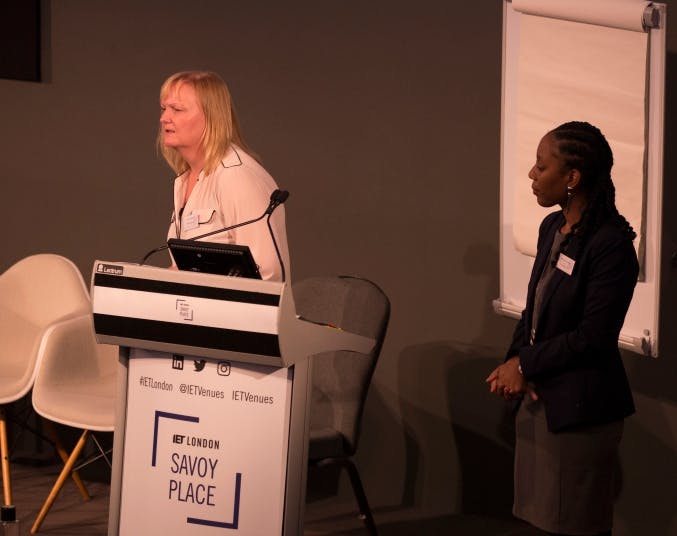 An Early Career session led by Kendra Stonehouse and Alexandra Bowen-Opoku from Hitachi Rail explained now they have increased the percentage of women hired from 10 – 15%. Women-only open days generated 47 applications, 14 of whom have now joined the business. The open days are a chance to show what a modern factory is really like and to challenge stereotyped views about engineering. 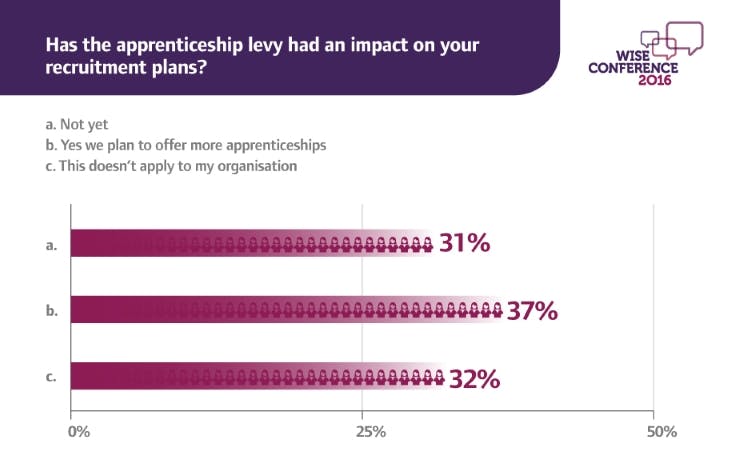 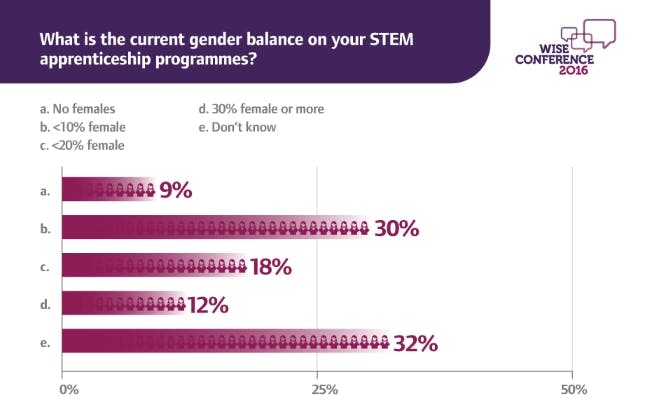 A generation of curious and adaptable people

The Rt Hon John Hayes, Minister of State for Transport began his keynote speech with a quote from John Ruskin: “The highest reward for a man's (woman’s) toil is not what he gets for it but what he becomes by it”. We are living in an engineering revolution, where tunnels and tracks are being forged underneath us 24 hours a day – transport infrastructure plans are not only driving the economy forward but driving growth in employment. High Speed 2 alone will need 25,000 people and the new road networks need an additional 10,000. 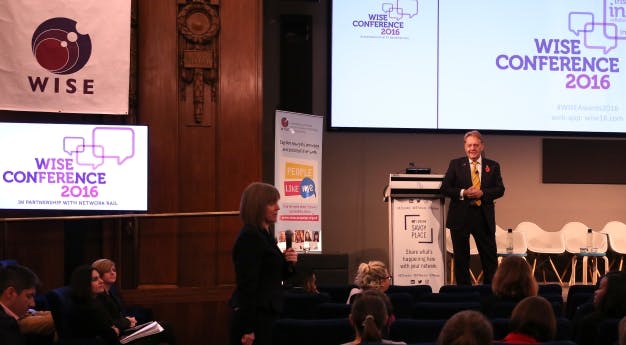 The Rt Hon John Hayes, Minister of State for Transport at the WISE Conference 2016


The minister said we need a “generation of curious and adaptable people to build/rebuild UK infrastructure”. Apprenticeships are a key part of achieving this and they now provide real opportunities for development and progression. He then went on to remind us that “if there ever was a time to inspire women engineers, the time is NOW”. He made a pledge to work with WISE to improve careers advice and guidance so that more girls and young women are aware of the opportunities in transport.

You can read the full text of the Minister’s speech on the Department of Transport website here.
A live recording of the WISE Conference keynote speech is available to watch here. 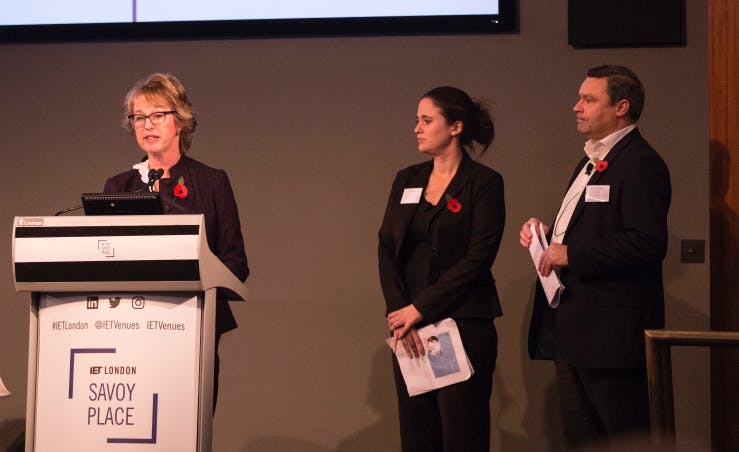 Camilla Barrow and Troy Easthorpe presented on behalf of Bechtel, highlighting the benefits of the WISE Ten Steps within their organisation, which they embraced because “our diverse teams work better than our non-diverse teams”. By treating diversity as a business improvement project, they have been able to make steps forward to addressing their gender imbalance. 50% of their 2016 engineering intake this year are female and women are 16% of their engineering workforce in the UK (double the national average). 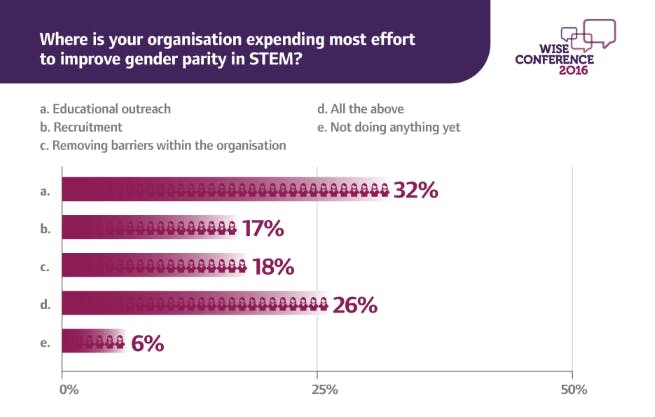 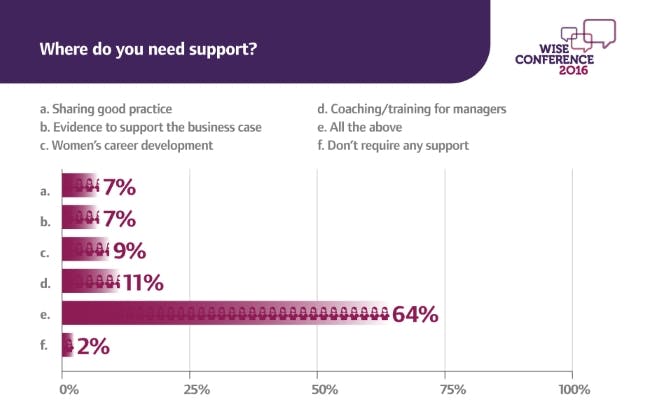 
This conversation wouldn’t have taken place ten years ago 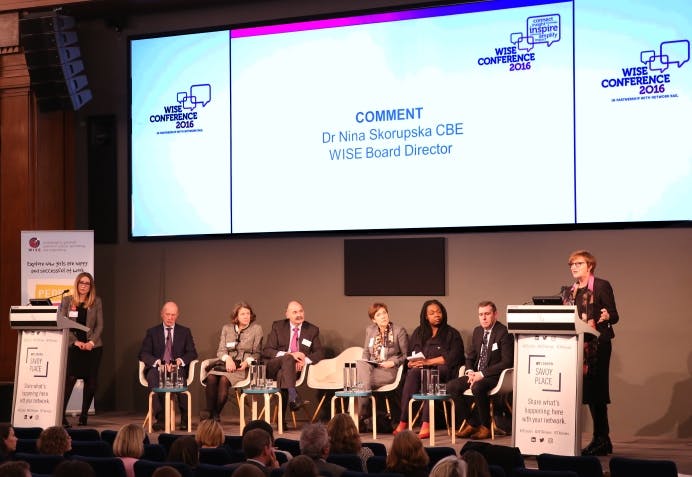 Sir Philip Hampton – Chairman of GSK and Chair of the Hampton-Alexander review of women in the senior leadership teams of FTSE350 companies, speaking on the gender-balanced panel debating women on Boards, felt it was a sign of progress that we were having the conversation. Michele Dix – MD of Crossrail2, recommended selecting candidates on the basis of capability rather than experience. Jane Basson, Chief of Staff to Airbus CEO talked about the value of role models “What you see is what you believe”. In response to a question about whether people with a STEM background bring something extra to the table - Myrtle Dawes from Centrica and Icheme felt engineers bring a long-term perspective and vision to board discussions, because they are used to working on 5-10 year projects. 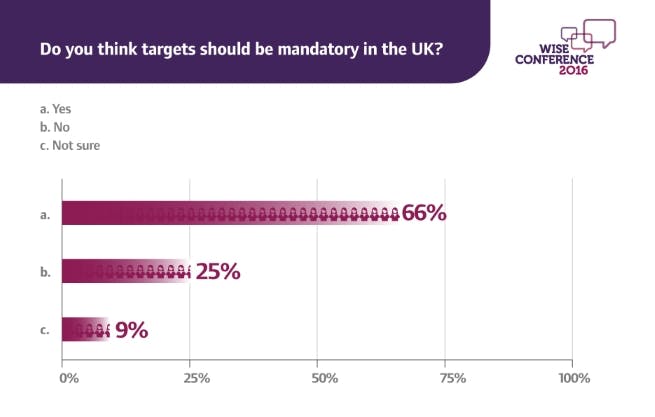 A live recording of the women on boards panel is available to watch here.

Amanda Hall, who started her career as an engineer with British Rail, shared Network Rail’s journey over the past 10 years to improve representation of women – from classroom to boardroom. A key learning points was: “Be aware of people’s differences, not frightened by them”.

A live recording of the headline session is available to watch here.

The question is not can we but will we

We looking forward to working with you in 2017 and beyond to make this happen.

WISE Members can find copies of the Conference presentations on the Member area of the WISE website here.
Not a member? Sign-up here.