Questions from the Audience at the WISE Conference 2016

Questions and Answers from the WISE Conference 2016

During the WISE Conference audience members had the opportunity to submit questions to speakers and guests via an interactive App. Below are a selection of answers from questions submitted but not covered on the day.

What are your magazines doing to push the STEM conversation to women?

We have given a great deal of coverage to the benefits of STEM careers for women, from how to encourage teenage girls to pursue careers in STEM, to celebrating the careers of STEM and tech entrepreneurs and sharing their careers advice with readers. The March issue of Elle was the Tech Trailblazers issue, and dedicated to the world of women in tech. We also frequently cover issues relating to women in STEM in a positive way on our aggregate site, Hearst Empowering Women.

What can we do on a journalistic level to really change the conversation and culture?

Write articles that continually address society's lazy, sometimes negative views about STEM, so readers question why girls are given Barbies while boys are given science kits, and women stop saying ‘I’m rubbish at maths’ in front of their daughters so they don’t internalise the message that girls aren’t good at STEM subjects.

Increasingly at Hearst we are showing women doing amazing STEM jobs in our magazines, and talking about how much they love doing life-changing things every day at work, and what that work actually involves – we know from the Not For People Like Me research that the language used is very important. Featuring these inspiring women alongside film stars, entrepreneurs and fashion designers will get the message across that these are ALL aspirational careers.

And showing women who’ve reached a high level or done something really brave and inspiring – I’m thinking tech entrepreneurs and female CEOs of big STEM companies – will show mums, daughters and grandmothers that there’s enormous scope for success in this field.

For as long as we don’t have critical mass of women in our teams, the shadow of tokenism will always remain. This is true from the very top to all levels of the organisation. The key is re-framing – when our recruiters ask a hiring manager what kind of profiles constitute their current team, then asks what kind of profile would best complement and bring another perspective, we start to have different conversations. Hopefully, the end result is still achieving an internal target, but the understanding of “why” becomes a little clearer.

A lot of what has been brought up today is about encouraging and inspiring women to pursue STEM careers by empowering women, glorifying diversity, getting higher management to achieve these targets and getting girls interested at a young age - but what role can the everyday male colleague take part in to fight these biases whether they are internal or blatant? How can we hold men accountable to do their parts?

I think it starts firstly in the home, in schools, then the work place and finally society as a whole. ‎In essence we have a role to ensure that not only do we promote the benefits of diversity and encourage the taking of STEM subjects in schools but also demonstrating and showing where women can and are making a difference in our businesses. As for any perceived biases I genuinely believe a good Manager irrespective of gender has a role to tackle this at source. If not they are part of the problem and need to be managed accordingly. As to how men can be held more accountable, I think that comes in many different ways from peer group and bottom up challenges to being recognised where good practice is being shown and applying consequential management where it isn't. “And of course, the more we, as men, stop acting like “having more women in STEM means our jobs as men are threatened” (zero-sume game) and the more we start seeing and living out the gains from this change (e.g. taking a new rhythm in our careers, because let’s face it, we will be working for much longer than our predecessors!), the more we will create a space where everyone has the opportunity to be their best self at work. Let’s not forget that mean face a certain bias too. So I see us men not only challenging our peers and management when we see bias on women (they are less confident, they can’t be likeable AND competent) but also as men, to challenge the male bias (being macho, show no chinks in the armour). We expect our leaders to be coaches, not commanders. So when everyday male colleagues behave as coaches, they are already winning the fight on bias. 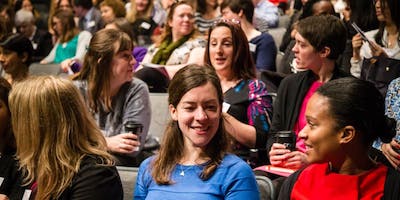